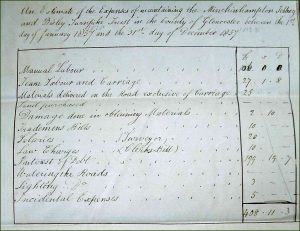 Road Travel in Georgian Gloucestershire: the Turnpikes and Road Improvements

Nicholas Herbert painted a vivid picture of transport routes in the early 18th Century – primitive surfaces, often narrow in width and sometimes routed up steep gradients. Early maps show how trees formed prominent waymarks (e.g. locally ‘Foston’s Ash’). The creation of the Turnpike Trusts (from the 1720’s in Gloucestershire) ensured maintenance and improvements became the responsibility of designated gentry and tradesmen (many of whom could benefit from improved highways – as would the Clothiers in our area). Toll houses and gates, erected to ensure tolls could be levied, were dismantled in the late 18th century when responsibility passed to local authorities. 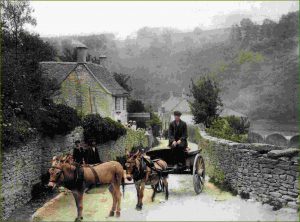 Roger Carnt, Pete Drover and Camilla Boon gave a great presentation of images from Mike Mills’ collection, covering all parts of the parish and from Edwardian times until the 1980’s. A great many of these pictures had not been shown recently and those attending enjoyed trying to identify locations and people where this was not clear. Of course we missed Mike’s extensive knowledge of the area and its people. 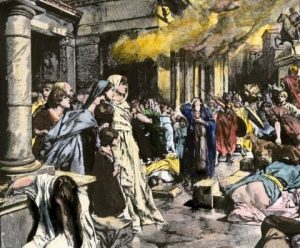 What happened when the Romans left

Will Parker gave a detailed account of  events from the beginnings of Rome as an Empire after Caesar crossed the Rubicon in BC 49 to the creation of Hwicce, a province of Mercia embracing Gloucestershire, Worcestershire and part of Warwickshire. The various revolts that led Britannia to leave the Empire in AD 410 were followed by invasions of Angles who settled in East Anglia and Saxons who pushed South and West. The Saxons drove the Romano-Britons to Wales and Cornwall and conquered the great Roman cities of Gloucester, Cirencester and Bath. Along the way they engaged in the great battles of Mount Badon(Bath) and Deorham (Dyrham Park). Gildas the wise, the monk and chronicler, tells us that Vortigern the Great King of the Britons, was exiled in North Wales.

Gloucestershire and the Atlantic Slave Trade

Tony Conder’s detailed research and forensic analysis of the extent of the slave trade and its permeation into the wealth of the the UK, specifically Gloucestershire, was quite staggering. Bristol being the epicentre of much of the trade, numerous local estates clearly profited from this – including Dodington Park, Prinknash House, Bowden Hall – as did countless individuals of more modest means. The developers of Gloucester Docks had hoped to link to this trade, with slave owners and sugar traders Samuel Baker and Thomas Philpott establishing warehouses (still named after them), however the slave trade was abolished shortly after completion. Tony outlined the role of abolitionists of varying faiths, notably Quakers and Baptists, including Gloucestershire based Samuel Bowly and Joseph Sturge, and also showed how abolition did not mean the end of exploitation or impoverishment of former slaves. He also pointed out that the massive debt incurred through government ‘compensation’ to slave owners (estimated to amount to 40% of the UK’s GDP) was only finally paid off in 2015. 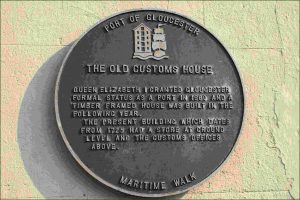 Dr Ray Wilson gave us a comprehensive tour of the history and geography of Gloucester  Docks. Fully operational in 1827 and connected to the Severn via the ‘Gloucester and Berkeley Canal’ (known as the Sharpness canal today) the docks were a hive of activity, mostly connected to the grain trade, although from the late 19th century Sharpness took over much of the trade. The fate of many of the warehouses – many of which have been restored – was outlined, and we viewed several surviving relics of the former docks: the perimeter security wall, a concrete barge, the Custom House (now Soldiers of Gloucs Museum), the dredgers, the Mariners Chapel and the replica trams (horse drawn on a line which went to Cheltenham). Well worth a visit to view in person.