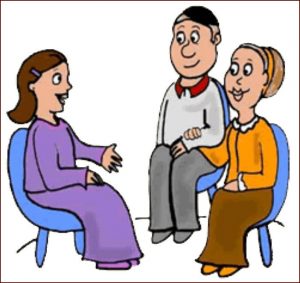 An evening rich in memories of the Chalford area 70 years ago, with a wide range of recollections from our Oral History Project. Carefree childhoods playing in the woods, milk rounds, shopping locally, war-time rationing and encounters with PoW’s and US airmen all featured. We finished with archive clips of George and Dorcas Juggins extolling the virtues of snuff and regular shopping trips to Bisley with a pram to convey their purchases. All illustrated by great photographs from the area. Many thanks to all who contributed in so many ways. 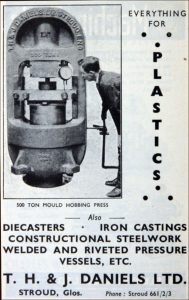 This extremely interesting presentation took us on a tour around the Stroud Valleys with numerous pictures illustrating the vast range of industries that sprung up in or around the former cloth mills from the 19th century onwards. Early employers included foundries, engineering firms, boatbuilders, stick factories, cloth-making, early plastics, pin mills, silk mills and brewers. More recently electronics, furniture and piano makers, drinks manufacturers, a snow manufacturer, the council itself and fitness gyms have moved in, alongside residential development.

Blessed be the springy turf: History of The Commons

Terry Robinson gave a fascinating and comprehensive account of the origins of common land in the UK. Originally owned by the local Lord of the Manor  with specified grazing rights for villagers,  incursions occurred through dispossession and industrialisation through a wave of Inclosure Acts. From the late 19th century there was a realisation of the value of such land for recreation and well-being, leading to the protection of open spaces, and to the creation of the National Trust. Currently 80% of common land is protected in some way (e.g. SSSI, ESA, NCR, NT, RSPB). Minchinhampton and Rodborough Commons are renowned for rare botanical species enabled by the grazing cattle. Minchinhampton is also known for its Iron Age earthworks, as a site of former quarries, and Pillow Mounds and other earth works associated with rabbit breeding. All of which make an interesting mix with the golf course, ice creams and kite flying! 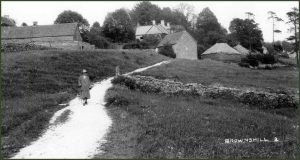 Brownshill: Local historian Phillip Pearson took us on a guided walk of the hamlet. Bounded by the former Bisley common to the north and the unstable valley slopes with Fullers earth to the south,  the hamlet was significant for its position on the original thoroughfare to Stroud  ‘London Road’ (now St Mary’s Way). We learnt that this once took a lower route down the hillside (shown in the photo) but had to be moved up due to subsidence. Although the hamlet consisted of only a handful of houses at the time of the Enclosure Act of 1869, it expanded soon afterwards, and at one time boasted 3 shops. Most notable  however is the number of sites of religious worship located in Brownshill, and we visited them all. The highlight was the visit to the Arts and Crafts RC Chapel St Mary of the Angels, where we also saw a gargoyle and stones from the Tudor Chapel sited nearby.

“Get orf my land!”: A History of Farming in Gloucestershire

John Putley gave a lively talk about how farming evolved from the earliest times, packed with information and amusing observations. He described how a landscape that was naturally wildwood was tamed and altered to grow crops and feed livestock. He is interested in the hypotheses tested in experimental archaeology about how early man developed tools to till the land, fell trees and butcher animals. Iron Age, Roman, Saxon, Medieval and Tudor agriculture were dealt with, then into the 19th century via the Agrarian Revolution. Brief consideration of the Corn Laws, then up to the First World War, with discursions into how far back carrots were grown, when hens were introduced (where did they come from – apparently, no-one is quite sure), a jolly piece on rabbits and a tribute to our local breeds of cow, sheep and pig. A thoroughly entertaining evening. 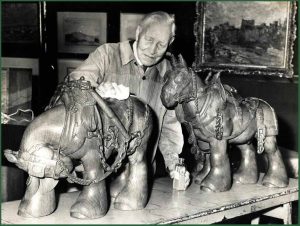 Jacquie Sarsby gave an interesting account of Simmonds’ work, from toy making to murals, aeronautical engineering, to cabinet painting and sculptures of animals. His marionettes, dressed by his wife Eve (a skilled textile worker) were known nationally, and puppet shows toured in aristocratic circles. His association and collaboration with others in the arts and crafts movement such as William Rothenstein, Norman Jewson, Fred Briggs, Phyllis Baron and Dorothy Larcher was also covered. 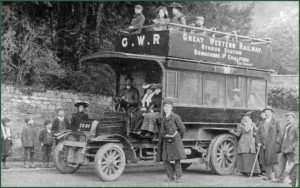 With another of his popular slide shows Mike Mills gave us a fascinating insight into modes of local transport from donkeys and horses (including the Chalford Fire Brigade!), to push bikes and motor-bikes, trains, cars and early lorries. 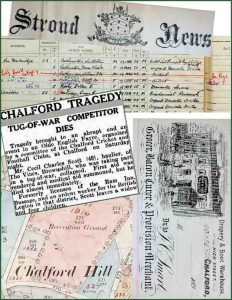 Rose Hewlett gave a fascinating talk entitled ‘A Village through time’ tracing the development of Frampton-on-Severn from the earliest settlers on. She showed how written records, and studying the archaeology and architecture of the village had helped piece together its history. Important developments included the old Manor (now Manor Farm), the Wool Barn, Frampton Court, and the Gloucester and Sharpness Canal. The annual  Frampton Feast can be traced back over 800 years.  ‘Frampton on Severn: an illustrated history’ by Rose Hewlett and Jean Speed is available from Rose. 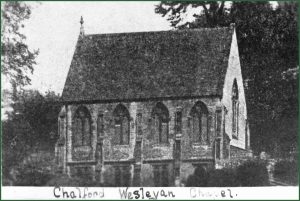 John Loosely’s account of Nonconformism in Chalford set out the context of suppression of Puritan practice (through the 1662 Act of Uniformity), followed in 1688 by the Act of Toleration, enabling different forms of worship to flourish. The wide range of faith groups represented in the parish was covered – the independent France Meeting (later merging with Congregationalists), the Baptists (probably the largest group with chapels in Chalford, Eastcombe and Bussage) and Methodists (Wesleyan and Primitive). A driving factor for some pioneers appears to have been concern about ‘drunkenness, immorality and rough living’! The building of many chapels was funded by private individuals. Congregations of 330 or more were common. 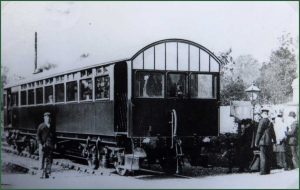 Tony Conder gave a fascinating overview of the county’s railway network, which grew in the late 19th century to a point where there were 150 stations. Now there are just 10. Gloucester was originally the hub of the network, with lines of different gauges meeting, linking to the docks:  ‘Lost in Gloucester’ was a common phrase as goods were transferred from one system to another. Railways were used for freight, work and tourism (e.g. Symonds Yat, the seaside) and in the war for munitions (e.g. Quedgeley) and transporting new recruits and wounded soldiers. Some lines were dismantled during WWI for re-use in France and were never replaced, many other were lost in the Beeching cuts.