5 Authors talked about the background of their diverse chapters and the research behind them. This was followed by a group photograph of the authors.

A report from John Dawson about financial matters was read out, and the accounts circulated.

The current committee was re-elected.

Information was given about forthcoming events.

It was suggested that a receipt be given for membership payments. 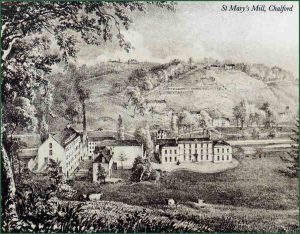 This was followed by an illustrated talk by Professor Jenny Tann.

Walking into the Picture: The Gloucestershire Woollen Industry through the eyes of artists.

Jenny took us through the history of the woollen trade locally, using a range of pictures: people fulling; an early painting of a mill and clothier’s house; a picture of Cuttle’s Mill (in the Museum in the Park), sale notices for various mills; paintings of the Steambridge estate; and a picture showing mills in the Toadsmoor valley discovered in the USA. The detail of each picture gave fascinating information about the people and the processes involved.

Allan Pilbeam gave a fascinating talk, taking us back to the time when Gloucestershire was recovering from the scars of the civil war. Robert Atkins, a former MP for Cirencester who lived at Pinbury Park, wrote the first history of the county in 1712 (this was reprinted in 1974 and is still available). The administrative structures were ‘hundreds’ and parishes. 23 hundreds made up a Minster – Bisley being one, and the expected pattern of roadways and footpaths radiating out from the village can still be seen. There were strong monastic links, and the landscape was dominated by the large manors, such as those at Bisley and Sapperton. Allan’s analysis of the etchings of the country houses revealed a great deal about life in the early 18th century. A map drawn up in 1695 by Robert Warden shows sixty deer parks across the county. Farming was a labour intensive business, employing most rural workers in both livestock and arable. 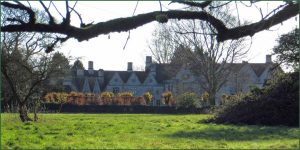 On a beautiful summer’s evening in July members were given a guided tour of Rodmarton Manor, a fine, late-built country house that typifies all that is associated with the English Arts and Craft Movement. Built in the early part of the last century, the Biddulph family, who still own the house, were determined to apply the principles of the Movement to every aspect of its completion, including the commission of many wonderfully crafted pieces of furniture which still grace many of the rooms.

Every opportunity was taken to nurture and support local craftsmen and women, and a workshop was set up in the village to employ the skills of local blacksmiths, carpenters and masons. With Ernest Barnsley as master-of-works, many of the craftsmen and architects we associate with the Arts and Craft movement in Gloucestershire contributed to the project. Peter Waals, who lived and worked in Chalford, designed much of the furniture.

Once completed, the Biddulph family worked to ensure the house remained at the centre of the community, supporting and reviving rural crafts. As an example, the drawing room was regularly transformed into a needlework workshop for the local women who formed the Rodmarton Women’s Guild, and their work is still on display in the house. The ballroom was also regularly open to the villagers for dances and social events, amateur dramatics and Punch and Judy shows for the children. An illustrated talk by Caroline Sheldrick.

Caroline took us through the history of medicines from herbal sources from Iraq 60,000 year ago until Dr Coffin re-established herbalism in Victorian England. We heard about local Gloucestershire herbalists including Daniel Roberts of Painswick who treated Scrofula and ended with our own William Blizzard and his dispensary in Coppice Hill now occupied by one of our members.

Members brought some fascinating items and talked about their significance. Many of these can now be seen on the Resources | Artefacts pages. Marion Hearfield gave a fascinating account of the development of Stroud Brewery; from its origins at Middle Lyppiatt in 1760, grown by the Watts family until it was ‘the largest Brewery in the South West’ (having taken over several other breweries and owning 400 pubs). The 20th century saw a slow but steady decline, and it closed in 1967. Marion had some great photos and maps to show how the area has changed over the years, and the last remaining fragment of the bonded warehouse windows in the wall by the canal in the town centre. in 2006 the new Stroud Brewery opened, and in 2018 the canal reopened. Marion’s book, available from the Sub Rooms, gives a lot more detail. Mike Mills showed us his extensive slides of the villages ‘on top of the hill’, backed by his encyclopaedic knowledge of the buildings and people. We saw fascinating pictures of villagers’ groups, the changing cottages and many shops long gone. Chas Townley’s talk took us back to the building of the Stroud workhouse in 1838/9 at a time when Poor Law Relief was extended to over a quarter of the local population, such was the extent of poverty, sickness and disability. The photographs shown, albeit from the 1930’s illustrated the spartan nature of the building. He explained how with the creation of the Welfare State and the NHS in 1948 the National Assistance Scheme took people out of the workhouse, which was then closed. Di Wall from Minchinhampton gave a fascinating talk about how the war affected women in the area: from seeing their menfolk off, to losing husbands and sons. They supported the war effort through sewing, knitting, nursing and taking on roles in local factories and on the land. She illustrated her talk with examples of local women, and then went on to explain how women’s war contributions linked into the emergence of the W.I. and indeed the suffrage movement.